Greetings, in this months issue we interrogate another old scener by the name of Jack Daniels of Avantgarde, hit it... 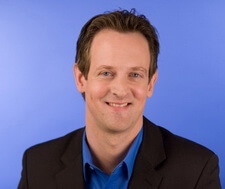 J)
Well, my real name is Tobias and I am 20 years old. In the scene people know me as Jack Daniels. I work as a flight-controller for Alitalia at the airport in Düsseldorf. No idea how long I will be doing that job but at the moment I enjoy it. I'm 1.90m tall and have blond hair and blue eyes (ED - ooh oooh), as every German. My hobbies are sports (soccer, ice hockey, tennis) and hanging
out with friends (going out to parties, discos and stuff) and computing (mainly calling boards and playing PC). Due to my job I don't have that much time left for any kind of extraordinary hobby.


V)
Please tall us all about your scene life, like what groups you have been in and what happened.

J)
Sheesh, if I would tell you everything about my scene life that would be a damn long story. Anyway, it all started in 1986 when I built up Cocaine together with 3dk, Duck Dunn and some others, after laming around and playing games for a year or so. We got quite into the scene and I started mail-trading at that time as well. Due to a misunderstanding between 3dk and Duck Dunn, they left so I decided to let the group die. Orion asked me to join and I agreed. After we solved that misunderstanding, 3dk joined Orion, too. At that time we came up with the idea to produce a disk magazine. By coincidence we found the name Corruption. After quite a while in Orion some of the old members left because of problems with the Dutch section and so I was suddenly
leader of the group. After running it for a few months we decided it would be better to let the group die. 3DK and me joined ATG right afterwards. In 1988 we released the first issue of Corruption under the ATG label and it was quite a success. We've been in the group for almost two years and released a couple of issues with lots of different outfits. Though we were doing very well we were still looking for a change and that was the reason we quit after quite a while and decided to join Paramount. After some months we came to the conclusion that they weren't able to provide us a new outfit for Corruption in time, so we left in order to join Genesis Project. After releasing one single issue of Corruption under the GP label we got booted because of big trouble with Antichrist and his attitude towards our magazine. We didn't really mind being kicked as we just had too different point of views. Dominators asked us to join and we agreed. After a few weeks only in Dom, 3dk left for the Amiga and Deff joined the Corruption staff instead. While being in Dom, I finally started calling the boards and got Dream Park as our HQ and helped making it what it is now, a legend. After more than one year in Dom I quit the group and scene in general. But I couldn't leave my hands off it and so I returned only 6 months later, and after quitting again and returning again, Deff, Freestyle and me brought Avantgarde into the scene and that is my actual group and Im not willing to join any other group at the moment, as we put quite a bit of work into it.


V)
Quite a history there Tobias, but why do you have the handle Jack Daniels and did you have other handles?

J)
I chose Jack Daniels as my handle back in 1986 because the first time I  got drunk, it was caused by a bottle of this Tennessee Whiskey. I've never had any other handle except for the time when I was in two groups at the same time. In this time I used to be Jack Daniels/Paramount and Camooflage/TRSI together with a second person at the same time. 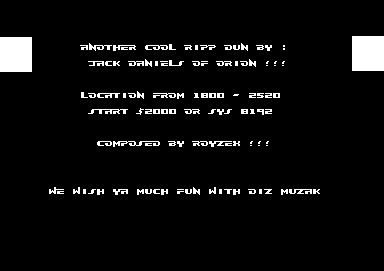 V)
Give us some of your personal favourites:

Crack group: Avantgarde (anything else).
Demo group: Flash Inc.
All time group: Dominators.
Cracker: Antitrack.
Scene pal: My group mates and a damn bunch of others.
Board: Terminal Obsession & Dream Park forever...
Coder: Walt, Crossbow.
Musician: A-man, EVS, Danko.
Artist: Gotcha.
Game: 64: Welltris, Californian Games, Alter Ego.
PC: Premium League Manager, Syndicate, Leisure Suit Larry 1-5.
Food: junk food and steaks.
Drink: Jack Daniels, Veltins and some nice cocktails.
Film: Silence of the lambs, Top secret, Naked gun.
Woman: I simply love the Spanish girls. long brown hair, brown eyes. That might be the reason I had so many Spanish girl-friends when I was on vacation. Here in Germany they are so hard to find.
Sexual position: All of them.
Computer: There will never be something like the C64, It is unique, but I love my PC as well.
Others: Stephen King books, House music, Married with Children, holidays, flying in business or first class.


V)
Tell us what you think of the rebuilding of legendary groups like Ikari and Dynamic Duo, etc..

J)
It sucks. According to these dumbfucks who rebuild a fake Ikari sometime ago, I was in the group as well, but that is just pure bullshit as you might have guessed. These lamers only try to gain some attention and fame with abusing the good reputation of an old elite group. Even when there are some of the old members in the group, that doesn't justify the rebuild, the group will
never be as successful as before anyway. But some people will never learn...


V)
What's your views on the new C65 everyone has been talking about recently?

J)
When they think that they are successful with it... why not. Well I couldn't care less, I won't buy it anyway.

V)
Is the scene still cool? what do we have to do to improve the situation?


V)
I agree 100% there, what are your future plans in the scene and in real life and the future of Avantgarde?

J)
I will stay in the c64 scene as long as I enjoy being involved in it, at the moment I have no thoughts of quitting. In 1-2 weeks I will get my pc modem and will start calling the PC boards and enter the pc scene. But the most important thing for me computer wise is to stay I touch with all the friends I gained on the 64 for a long time. Avantgardeness will last as long as we have fun in the group, our group is based on fun and we don't act under any kind of pressure. We only do what we want to do, in contrast to too many of the guys on the C64 will consider it being a hobby. We will gain some more members soon and keep releasing and contributing to the story of the 64 scene for quite a while, I guess. In private I will quit my job at the airport in a few months and start something new, it seems at the moment I will either go to America for one year and work for an airline over there or I will start to study somewhere in the world. I like the idea of living abroad for sometime, in general I want to live happy and long life with lots of fun all over.


V)
What's your views on the Hack+Phreak scene at the moment?

J)
It could be worse, but the h/p scene has already seen better days as well. When people would keep their promises, it would be a lot easier. Too bad that AT&T installed this CMR system that watches the calling cards used at the same time from two different places and kills them off. But there will always be a way to call out. 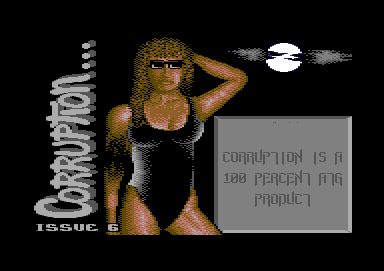 V)
Okay let's do a quick brain storm, tell us what you think after...

Woman: You can't live with them, you can't live without them.
Friendship: the most important value.
Scene: Fun, hobby!
Cracking: Keeps the scene going. Breaking the law.
Gay people: I don't care as long as they don't try to touch me!
Scene wars: Stupid, but funny.
Raggings: That depends. When a rag is intelligent and/or funny...
Interviews: Most of them are boring. Done a lot of them...
Me!: you? nice guy.
Hotline: One of the old legends. Rebuilding the group was a flop! 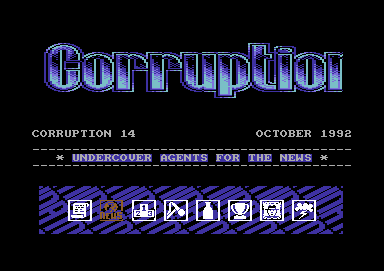 V)
Okay, nearing the end. If you have any people ya wanna greet and say hello please do...


V)
Okay thanx for the interview pal and I will catch you later!

J)
See you on the boards.